THE WONDERS OF THE NORTH COUNTRY SPIDER

With the onset of Spring, the start of the river trout fishing season, the first insects to be seen in large numbers are the March Browns and LDO’S, Large dark OliveS. Both of these are common in running water throughout the UK.

The weather this time of year is unpredictable; while this can sometimes put paid to our day on the water, these conditions can also work to our advantage. The wind and rain make things rather tricky for the flies mentioned above to hatch! The conditions can often mean that the adult fly never fully make it out of their shuck. Even the ones that do can be pushed or pulled over by either the wind or rain, and they sit struggling or even immobile as they drift off downstream. These ‘failed’ emergers, often known as ‘cripples’ are an easy meal for a hungry Spring trout.

It’s also worth pointing out that these flies have another stage, the spinner, these are the adult flies, the ones that breed. When they’re done breeding, they die, again another easy meal drifting along with the current for a hungry fish! 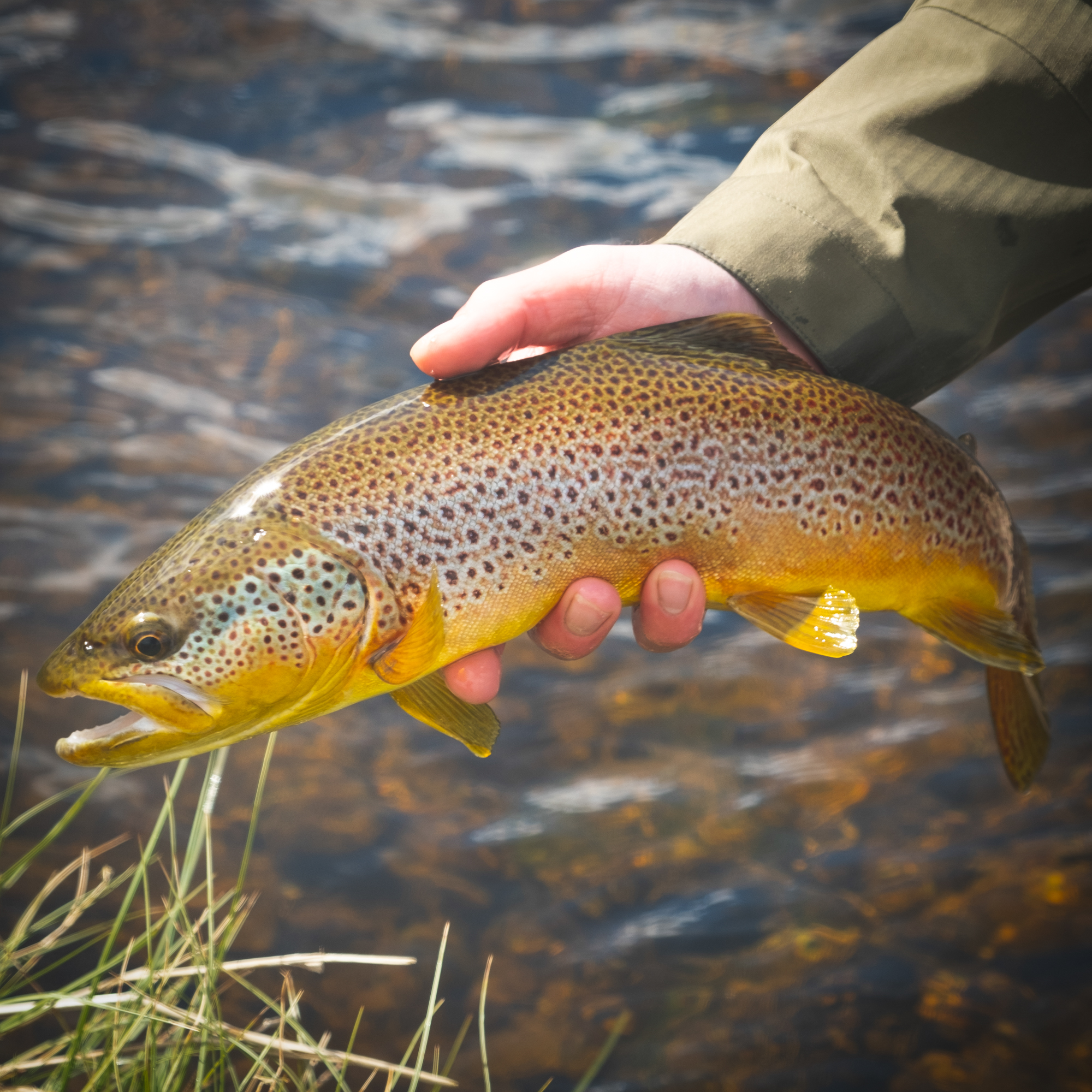 With an abundance of easy, ready-to-pick-off meals on the go, it’s easy to see why so many anglers still prefer the wet fly, Spider approach to targeting Spring trout. It’s a searching method that can come up trumps time and again, and very importantly, it’s a method that can work when others fail. Spiders and how we fish them are just the ticket for emulating this crippled or drowned fly.

For this fishing style, similar to nymphing with a long leader, we need to look at longer rods, rods that offer us control. We shan’t be casting too far, (we’re not really casting at all, given our long Euro Leader). Short casts and with short controlled drifts are what’s required. When fishing Spiders, a Euro Nymph style leader can offer us a lot more than a traditional wet fly set up, allowing more movement and reach.

A 10 foot 3-wt would be the ideal rod, of course, as it’s light, it’ll be relatively softer in its action, which helps cushion what can sometimes be frighteningly aggressive takes. However, shorter rods can also be good, especially on smaller rivers, but again a light one, 3-wt with a forgiving action. 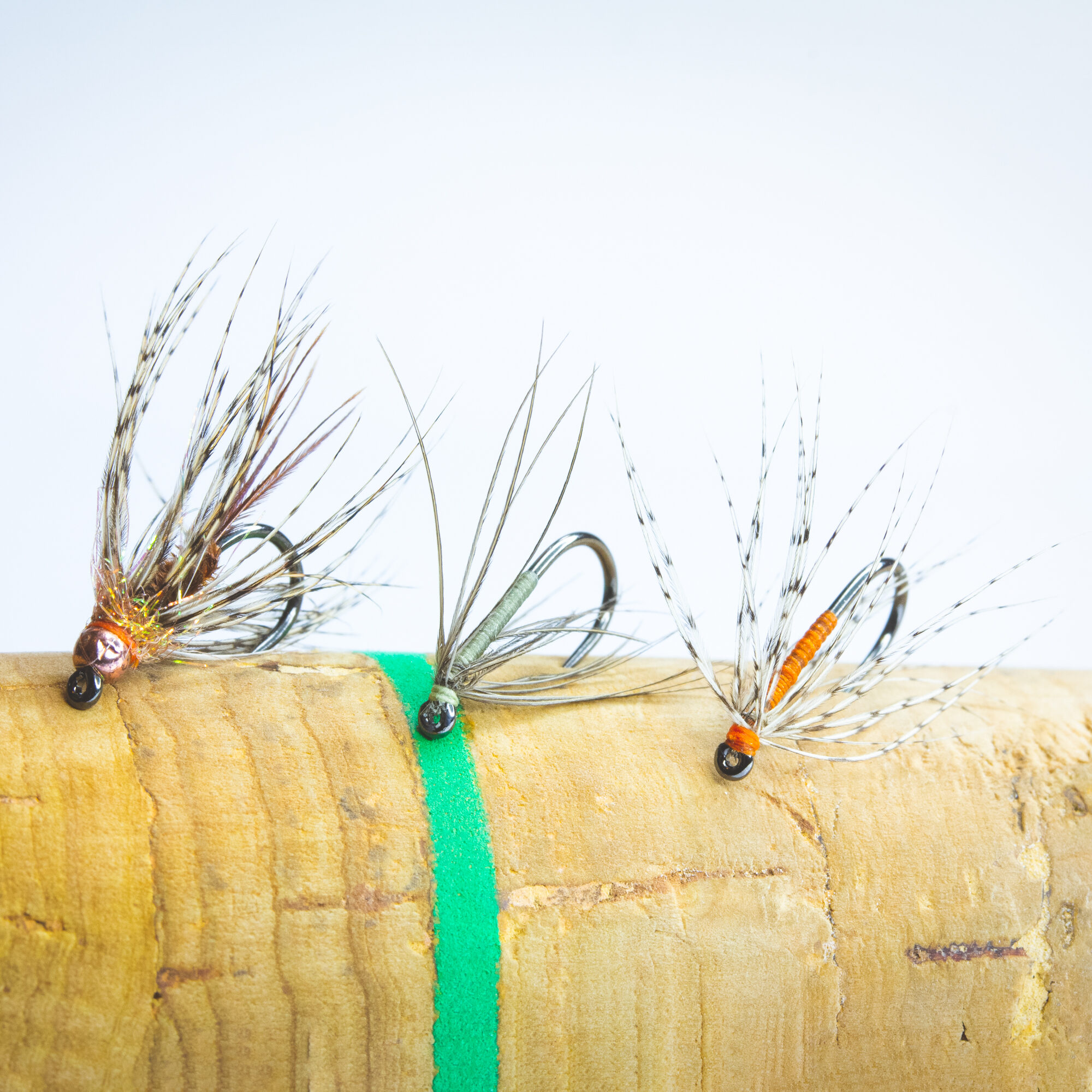 I’d couple this with a reel that suits, one that balances the outfit, ideally with a large arbor and a good drag, as you’ll often be fishing light tippet. A floating line of course, you may want to cast a little further at times, one that’s taper is not too aggressive, as we’ll be looking at slower casts with a more open loop so that we can avoid tangles.

An indicator, as you’d expect with a Euro Leader, is essential when close quarters fishing as it’ll show even the most delicate of takes, it’s a super addition to your Spider set up.

Tippet length, on the end of this leader, should be around 6 to 10ft, the length will be dictated by the depth of water and the number of flies you use. Look to use a diameter of 0.10 to 0.14mm, this will vary depending on the size of trout you’re likely to encounter.

Most of us would use three flies spaced well apart, and this still holds true on the Euro Leader, but for a better turnover and to cover more water, try a point fly that features a tungsten bead. Not only will this aid turnover, but it will also anchor the cast – with two unweighted Spiders on the droppers allowing you to cover more water. My usual tippet set up would see the first dropper three feet from the indicator, then 2 foot to the next dropper, followed by 2 foot to the point fly.

There’s a very good reason that Spider patterns haven’t had the same attention paid to other styles of fly, and that’s because they work and have done for such a long time now. Keep it simple, a handful of flies is all you’ll ever need. For me, nothing much beats the Waterhen Bloa, I’d be following this up with the Partridge & Orange, and for the weighted option, the Endrick Spider. I also like Woodcock & Hare’s Lug and Silver Spider. That’s it, three essentials and another two to make up a handful.

Start with a short cast and aim the flies directly upstream with the rod tip pointing upstream and parallel to the water. Then as the flies drift back just raise the rod tip as they come toward you. By doing this, you’re taking up the slack and allowing the flies to drift naturally. As the rod is raised vertical, it’s time to lift and recast. Once you’re happy that you’ve covered your area, (grid the water as per) Early Season River Fishing Part 1 ). You can let out more line and cover more water and so on. The longer your cast- remember you still need to be in control, the less obvious you are to the fish as you’re further away from them!

You can also switch the whole thing around and do exactly the same but downstream but be mindful that you can and will lose more fish this way. You’ll often get a sharp tug on the line and then nothing. It’s incredible how often this happens when fishing downstream. To avoid these crazy takes, and of course, any snappeges, I tend to length the leader. The part between the indicator and top dropper, just to introduce some more stretch in the line.

It’s also worth imparting some movement at times with both approaches with a lift of the rod tip, an induced take if you like. This additional movement in an otherwise lifeless fly can work its magic quite often.

Spiders can allow you to target a whole host of water conditions, but the areas I like are where rapids begin to flatten out into a glide, this is often the most productive. I also like shallow flats as the water starts to speed up running into rapids (awesome water for big fish). You need to target this water with the ‘upstream approach’ and with a lengthy cast keeping low to hide your presence.

Dubbing: Natural mole fur (I think it works just as well without)

Collar: A touch of Spectra no.46

Try tying your own Waterhen Bloa

SPRING TACTICS FOR SUCCESS ON STILLWATERS

Dries For Show, Nymphs For A Pro: PART...

Tackling Up For Sea Trout

THE DEVIL IS IN THE DETAIL